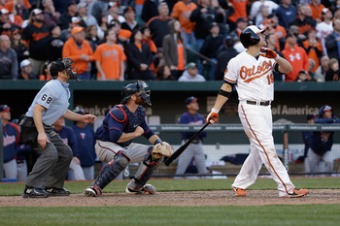 Within the first four games of the season Davis had more RBI’s (16) than 17 Major League teams and twice as many RBI’s as the Padres, Giants, Cubs, Dodgers, Marlins, and the Pirates. He also had more RBI’s than any 2 players in baseball combined. He had more RBI’s than any player in baseball history throughout the first four games of a season, Three players held the previous record, which was 12 (Mark McGwire back in 1998). He is the first Orioles hitter to hit a home run in each of his first 4 games, and he is tied with 3 other players, including Willie Mays, Mark McGuire, and Nelson Cruz. The last player to drive in 11 runs in a 3 game series was Cal Ripken Jr. back in 1996 against the Mariners; Davis drove in 11 runs against Tampa Bay to start off the season. Davis also has the Orioles club record for most home runs over a 10 game span with 10 and over an 11 game span with 11.

So, with all of these records is Chris Davis going to be the next Babe Ruth this year? Probably not. The 3 other players that hit 4 home runs in 4 consecutive games all had amazing years. Mark McGwire started off his season with 4 home runs and that season he hit the most home runs in a season (70). Nelson Cruz had one of the best years of his career in 2011 with 29 home runs batting average of .263.

Chris Davis may not be the next Babe Ruth, but this could be signs of the power hitter that Baltimore has been searching for for years now. Expect him to go in a home run drought for a week or so, that’s what the past shows with Mark McGwire and Nelson Cruz. Hopefully he will not be looking for a bomb every time he is at bat because he will end up with the record in MLB for strikeouts which no fan of MLB wants to see.